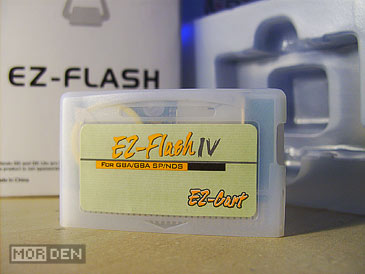 Nintendo DSi, stripped of backwards compatibility with Game Boy Advance, marked a definite end of an era. For me, this was a wake-up call of sorts. I've been planning on getting a new and better flash device for my Game Boy Advance for ages and now, and when all eyes are turning away from Nintendo's old handheld platform, quality flash devices at reasonable prices will become harder to get. After looking into what works and what doesn't I chose EZ-Flash IV. The device is of standard Game Boy Advance cartridge size and features a MiniSD card slot with capacity support for up to 2GB. No real time clock, but who needs it anyway? 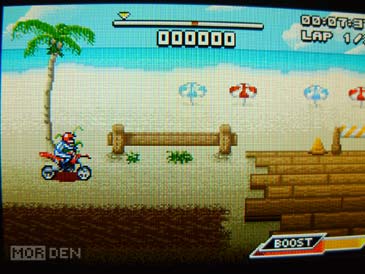 Game Boy Advance might not enjoy the same amount of attention from homebrew programmers as Nintendo DS, but it has its share of shining gems and Motocross Challenge is certainly one of them. The game closely follows the gameplay model of Excite Bike, adding updated graphics and not much more, but it works. It's a quality product and from the start, this was supposed to be a commercial release. Sadly, Nintendo broke the contract with DHG Games, but the developers were kind enough to release their work to the public. You can get it from here, since the official DHG Games site is no longer available. 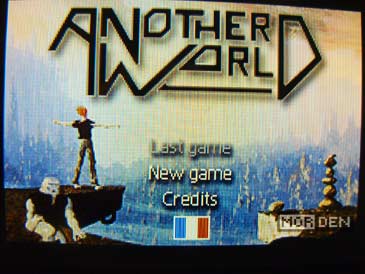 Everyone probably is, or should be, familiar with the next title on my play-worthy homebrew game list. I've already talked about the PC release of Another World, but you can't take your PC with you everywhere you go. Why not pop Another World into your Game Boy Micro and help Lester save his own skin? This is one of the best games I have ever played, so if you're not familiar with it, it would be best if you familiarized yourself with Eric Chahi's masterpiece immediately. The official Game Boy Advance port was done by Cyril "Foxy" Cogordan and is hundred percent freeware. Go grab the ROM here. 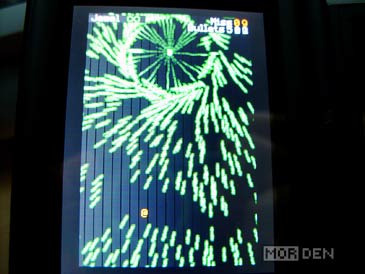 Last, but not least, some proper bullet hell, a rare sight indeed, especially on Game Boy Advance. Takayama Fumihiko has managed to create two top shelf titles, which thanks to their design aesthetic could easily be a part of bit Generations line-up. The first game is called BulletGBA and to play it, you'll have to change the screen orientation from horizontal to vertical, much like in some WonderSwan productions. The main objective here is not to shoot, but to dodge. You'll have a storm of bullets coming towards you and the only objective is to survive. Before you start your game, you can choose what type of bullet patterns you want to stand against. Both of Fumihiko's games use BulletML by Kenta Cho, a well known developer, famous for his amazing danmaku shooters. BulletML allows easy replication of bullet barrage from other games and thanks to these archives, patterns from many renowned shooters were added. 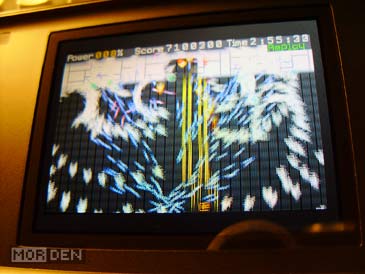 While still refining BulletGBA, Fumihiko released a second game called Vulkanon. This one is played horizontally and unlike BulletGBA, is not all about dodging. The player will have to destroy enemy ships while avoiding thousands upon thousands of bullets of all kinds. I couldn't tell you which one of these two games is tougher, but they're both addictive, especially if you're a shoot 'em up fan. Both of the games were developed using devkitPro and are open source. Another thing worth mentioning is that music was composed by a well known chiptune artist, Nullsleep. I have already linked to the games in their titles, but if you have somehow managed to miss it, go here. And that's it for today.
PR
2009.09.21 Mon Game Boy ★ Advance Comment    Tweet This!
『 The day I got my LSDJ 』 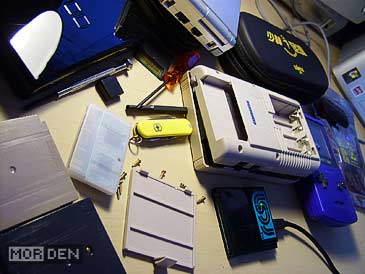 Oh man, I am a lazy bum and I admit it. It has been ages since I posted anything and I deserve a punishment. Too bad I'm out of everyone's reach and I get to get away with it - again. So why am I posting an entry now? Did something exciting happen? One could say so. I finally got my hands on a nice Game Boy DMG and Color flash unit, mainly for LSDJ purposes, which I think the cartridge sticker gives away. Since official LSDJ cartridges are no longer being manufactured, and haven't been for years, the developer, Johan Kotlinski, made the ROM image of the program available for purchase at a very low price of $2, directly from the LSDJ website. 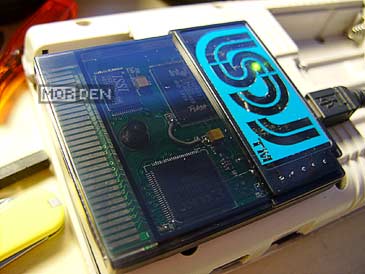 What is it and what does it do? The cartridge itself is a 64 Mbit USB Smart Card. The memory is divided into two 32 Mbit banks, which by simple calculation means, a maximum of 4 Mbytes can be stored in each one. Additionally, the device is equipped with a large amount of battery backed SRAM memory, which can be both written and read via the software client. This makes backing up of LSDJ songs and other save data extremely easy. The only downside is, the SRAM can hold data written by one application only. For example, if I were to save an LSDJ track, switch over to Carillon Editor and save one track as well, the data would either be overwritten or corrupted, leaving only the latest SRAM write fully functional and readable. 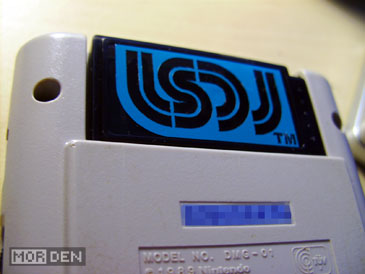 Now that I said a bit about the hardware, let me talk about the software instead. Some of you may already be familiar with LSDJ, as it is, alongside Nanoloop and Carillon Editor, immensly popular with chiptune artist and lo-fi musicians. In fact, one could say that LSDJ combines the functionality of both aforementioned programs to create the most versatile environment available on the Game Boy hardware. LSDJ is essentially a tracker - A music composing software which allows you to create your own sounds, but also comes with a wide range of samples. It was designed with stage performers in mind, allowing easy manipulation of pattern sets, etcetera. 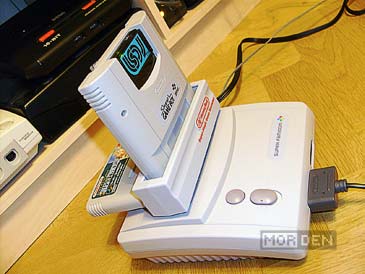 The LSDJ program is compatible with any hardware capable of running Game Boy dedicated software. This means you'll be able to create beats on your classic DMG, as well as on Game Boy Advance. It's also possible to run it on Super Game Boy, as seen in the photos. Since I mainly use a japanese Super Famicom Jr, I was forced to use a Honey Bee converter to boot up the SGB, but the positive results can be seen on the TV screen, even though the set-up used to achieve them doesn't look too sleek. 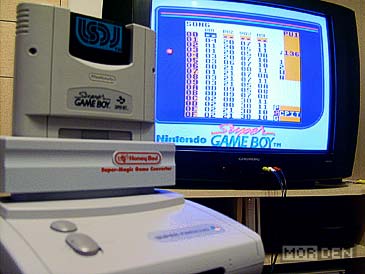 Why did I decide to go with the Smart Card solution for LSDJ? The answer is quite simple. The Smart Cards are high capacity and low cost, plus, unlike Bung cartridges, which are impossible to obtain nowadays, they use USB. Today, the only alternative to Smart Cards are BleepBloop cartridges developed by Jose A. Torres, and while they are superior in terms of design and reliability, they're only 16 Mbits and they cost a lot. This is mainly due to the design being more sophisticated and made to work like an original Game Boy cartridge. BleepBloop hardware has SRAM protection circuitry, as well as a memory controller identical to one seen in Nintendo's cartridges. The reliability factor is of greater importance to performing chiptune artists, than to simple folks like myself. Truth be told, I would buy a BleepBloop, but I'm cheap. 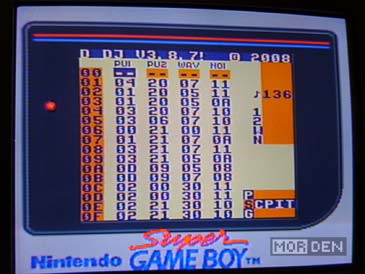 I have tested the cartridge on a multitude of devices, avoiding Game Boy Pocket, because supposedly, this model of Game Boy will simply suck the SRAM battery dry in no time. Same goes for Game Boy Light, since it's based on the same hardware design. So far, everything worked flawlessly. I have tested dozens of home-brew applications and games for both Game Boy Mono and Color, and everything seems to be running smoothly. The Smart Card certainly opens the door to a whole world of scene productions, and while these can be emulated, you and I both know it's never the same as running everything on real hardware. 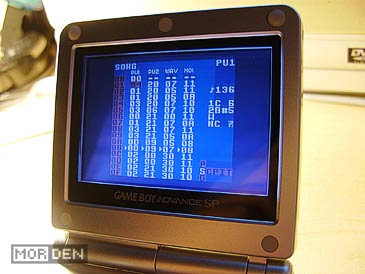 I wanted to make a video showing the LSDJ in action, but instead I made a compilation of Game Boy Color cracktros and other scene productions. I shot it with the Eye Toy camera from the Game Boy Advance SP screen, because Game Boy Color screen is impossible to capture. However, I can assure you that everything works fine on both systems. I used a line-in for the audio, so enjoy some great chiptunes and stay tuned for the upcoming LSDJ presentation.

Before I wrap this entry up, I want to let everyone know that I might be posting an entry dedicated to music making software for the Game Boy. Over the years I've come across and collected many applications, most of them really simple, but still fun. Game Boy music making is a vast subject, but I'll try to cover the applications I myself consider to be most fun. That's it for me - It's 3AM and I'm off to bed.
2009.09.17 Thu Game Boy ★ Advance Comment    Tweet This!
『 Mental Respirator by Phantasy 』
I know it's two years old and I know it's no news, but this just has to be the best scene production ever made for the Nintendo GameBoy Color. I have no idea how Phantasy have managed to produce this kind of firework without any painful slowdowns.


The engine is extremely efficient. Static graphics just rule and yes, the demo does contain the obligatory plasma effect. Plus, it has the coolest soundtrack you've heard in a GameBoy production [Wasn't the first tune among the demo tracks in Paragon 5 tracker?]. Huge respect for guys at Phantasy. Check out the video or download the production from Game Boy Demospotting.
2007.04.21 Sat Game Boy ★ Advance Comment    Tweet This!
Calendar