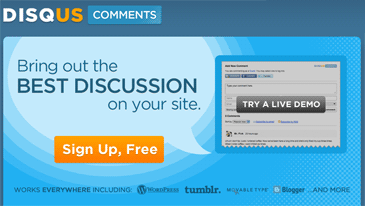 Because of the increased spambot activity, I have decided to change the comment system entirely. The Ninja blog engine isn't exactly flexible, but I've managed to successfully implement Disqus, which from now on will replace the old [Ninja's own] comment system. I won't touch the old comments; I have removed the old form, but I left the comment display code intact. They will now appear under Disqus comments.

Note to those, who are using Adblock or any other ad removing plugin; the comment number under entries is generated by a script, which might get blocked. This goes for Disqus form as well. I've run some tests, and everything is working just fine. If it's not working for you, try disabling ad removing plugins. Also, some connection managers block Disqus IPs alltogether, so if you're running those, add Disqus to your whitelist.

I've configured Disqus to use Akismet and additional community plugins to ensure stability, connectivity and to protect the blog from spambots. If you have any thoughts, drop me a comment, using the new and improved system. Enjoy.
PR
2010.09.09 Thu Random and ♥Hate♥ Comment    Tweet This!